The first game of the inaugural CPL Championship tie gave a lot of the things that the league wanted and needed it to have. It was well attended (just under 11,000), it had drama (2 red cards, a penalty and a penalty saved), and it gave all of the pundits something to talk about while we wait the week until Leg 2. I think what wasn't expected was how imbalanced the game was on the field, even if it wasn't on the scoreboard.

To say that Cavalry was anemic going forward might be too generous of an assessment. You could see it on the pitch. That's not to say that Forge was playing in spectacular form though. Both teams suffered at the start of the game with bad touch. Combine that with the obvious "feeling out" period and it was, well, a dull match. And then, at about the 30 minute mark it really started to pick up pace. Well, let's be honest, some fireworks kicked off and Forge started to play. Cavalry didn't really change their energy level or approach.

At half time I generated a passmap for both of the teams and, well, I was floored by what I got. Forge looked good. Really good. At halftime their average pass (received and initiated) locations show a good shape and nice spacing. Probably the worst part of it is that Novak was a little bit isolated.

Cavalry was the shock inducer. I have never seen a passmap like this (granted, I've only been looking at them for a couple of years). I'm not sure what to even say about it. Yes, the Cavalry play on the field was uninspired. Yes, the game had no real flow. But wow. No two players on the Cavalry combined for 4 successful passes. Part of this can be attributed to the possession numbers at the half; 29.9 to 70.1% in favour of Forge. Before you think that these numbers were caused by being down a man, remember that Waterman didn't get his red card until the 37th minute. The majority of the first half was played 11 v 11 and Cavalry still produced these numbers. 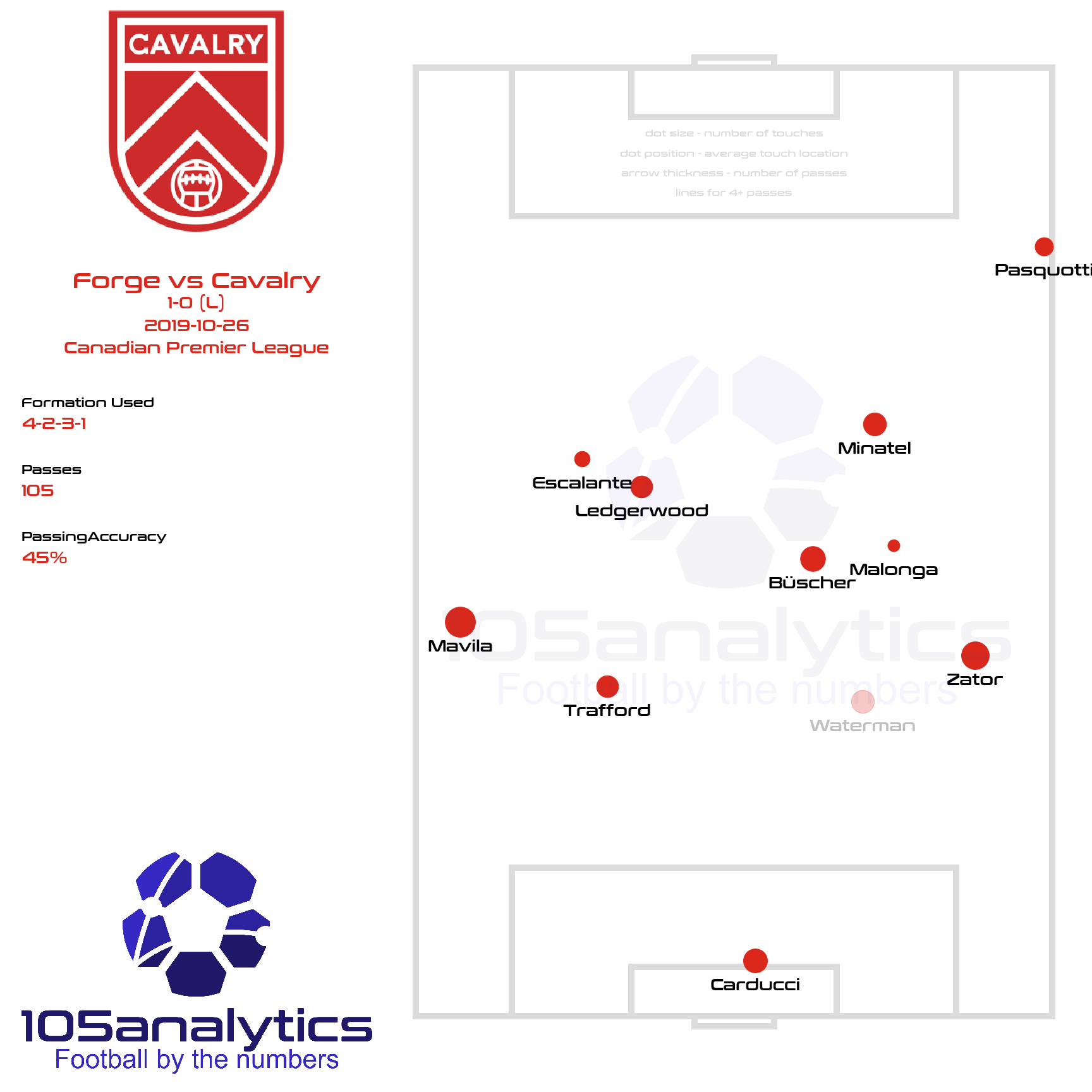 I think it's worth pointing this out again, no two players on Cavalry were able to string together 4 successful passes between themselves in the first half. Contrast that to Forge who were playing the ball around between their players much more effectively.

Another number that stands out at half time is the pass completion rate. Not only did Cavalry attempt very few passes, but their were only able to succeed 45% of the time. That is, well, abysmal.

In fact, as the 30 minute rolling analysis of their passing shows (below), Cavalry never really had any passing momentum throughout the game.

If you watch Cavalry's rolling passmap you can see some interesting things. At the 7 minute mark, Escalante's average touch location is in the top right corner of the pitch. At first I thought this was a problem in the data, but it isn't. Between the 7th and 37th minutes of the match, Escalante had one pass attempt. And it was a corner kick. If you watch carefully you can see that between the frames representing the 9th-39th and 12th-42nd minutes, Escalante doesn't appear in the diagram at all. He had zero pass attempts between the 9th and 42nd minutes of the match…which is amazing considering how involved he usually appears to be in Cavalry's matches.

In his postgame interview, Tommy Wheeldon Jr said he purposely kept Camargo and Brown on the bench to start the match because “…we know that Forge has a couple of periods in a match where they are without energy…” The 30 minute rolling analysis of Forge's passing (below) doesn't show any sign of a let up. If one did exist, all numbers suggest that Cavalry were still playing with a lower energy than Forge at that point in the match. An argument can be made that Wheeldon Jr made a tactical mistake with this decision.

As I've been writing this I started to ask myself, how bad was Cavalry's passing game? So I went and wrote some code to massage the data I have over the full season.

44.76% passing in the first half is the lowest of any team in a game this year. The next lowest was Blainville playing at York9 with 55.55%

242 pass attempts in a full match is the lowest of any team in a game this year. The next lowest is HFX playing at Cavalry (2019-10-05) with 252. The mean attempts in the CPL + CanChamp this year is 416. The mean first half attempts across those two competitions is 222.

There's no way around it, those Cavalry numbers are bad. Real bad. Especially for a game in the championship series. Bad passing numbers can be the result of multiple things though, not just a poor performance by the team with the ball. Pressure by the defensive team also has an effect.

I don't have an analysis built to statistically measure pressure on the ball, but watching the game it didn't seem like Forge were applying an abnormal amount of pressure. There was hardly any high pressure from Forge for the first 30-ish minutes, and after that it was less of a high press and more of a case of Cavalry just giving the ball back to Forge high up the field. One thing that Forge did do really well was close down the ball in the middle third. Cavalry had very little time on the ball when they did have it.

All of these passing problems resulted in Cavalry not being able to create meaningful pressure or attempts at goal in the final third. They only mustered 3 shots at goal in the game and only one of those was on target. That shot came in the 2nd minute of the match and it was from well outside of the 18yd box. I've not finished my xG model, but this is a very low quality shot. Using the chart in FiftyFive.one's blog post on The Value of Possession, that lonely Ledgewood shot probably had an xG value between 0.02 nad 0.05. Another way to think of that (if you're not familiar with xG) is that there was between a 2% and 5% chance of that shot going in, or you could think that between 1-in-20 and 1-in-50 shots from that location will go in.

Without an xG model it's hard to know for sure how high the quality of Forge's shots was. They did get significantly more of them though. They hit at least three cross bars and Carducci was nowhere near those shots. To say that Forge deserved two or three goals from the game would probably be safe. They didn't get them though, and that might be the real story line from this game.

The match was lackluster on so many fronts for Cavalry that I'm hesitant to read much into the success that Forge was able to find. But the one thing that they were able to do was exploit the Cavalry backline. Forge consistently got behind Cavalry with the ball and with intent. Cavalry didn't have an answer for Nanco. Borges was able to slice through them at will.

When Cavalry were able to get forward on the pitch, their backline moved forward so that they were still connected to the midfield. This opened up space over the top for Forge. Cavalry's backline was slow. Maybe it could be called lethargic, but that suggests that it was a one time lack of energy and effort. As individual players, I've not been a big fan of that backline this year. They are very good as a unit, you can't deny that. They have 15 clean sheets this season. But as individuals I think this match showed how easily they can be exploited one-on-one.

Up a man, carrying the play, and creating chances, Forge was unable to put their foot on Cavalry's throat and end the series in the first game. Like they've done a number of times this year, Cavalry has managed to find themselves in a game (series now) that they probably shouldn't be. Up by one on aggregate, Forge still has to do work at Spruce Meadows in a week. If Forge can find the back of the net first, Cavalry needs to score three which will be a tall order given the meetings between the teams this year. If Cavalry has one thing working in their favour it's the pitch.

The quality that the groundspeople at Spruce Meadows can turn out on match day will dictate the game. A mediocre (or worse) pitch is likely as they've not had it in good shape more than once or twice this year. The weather forcast for Calgary suggests that temperatures will be -3C and +8C in the lead up to the match. I'm not holding my breath for a smooth pitch and predictable ball bounces or rolls. It's going to impact the quality of touch the players have and the flow of the game. It probably also means that we're going to see the teams be very, very cautious both on and off the ball.

The last match at Spruce Meadows saw the pitch shortened because of ground conditions. If this happens again this might be take away the space in behind that Forge was easily exploiting in Leg 1. Less space likely means more importance being placed on the middle of the field play. The quality of the pitch, or a team's ability to deal with the lack of pitch quality, might become the thing that dictates who can play a style of game that sees them control play.

Regardless, when these two teams get together it's going to be a good, and fiesty, game.