One of the most frequently discussed topics on the CPL subreddit (https://canadianpl.reddit.com) is league and team attendance. The interest is at the point where there is a twitter account that posts weekly updates with the recent game attendance figures.

Probably the most often discussed topic is attendance numbers for mid-week games. The CPL has a pretty hectic schedule and, unlike many leagues, doesn't use mid-week fixtures solely for cup competitions. It's not uncommon for teams to have league matches on Wednesdays as well as Saturdays…followed by another Wednesday game, and another Saturday game, and so on…right everyone?

I figured I'd take a break from working on match level stats and see what I could extract from the attendance figures.

The first thing I did was see what the league-wide averages were for each day of the week. 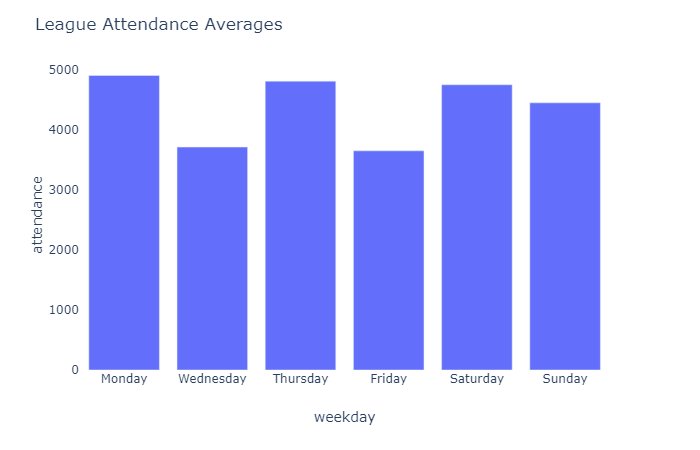 Unsurprisingly to many of the reddit crowd, there is a visible drop in attendance between Wednesday and Saturday games. Interestingly, there doesn't appear to be that same drop in attendance for Thursday games. Some deeper digging shows that there have only been 3 Thursday games this year. That is probably not a big enough sample size to make assertions about, and we shouldn't read anything into the Friday (1 game) and Monday (7 games) numbers either.

Sunday has a fairly low sample size, but we should look at it, Saturday and Wednesday a bit closer. 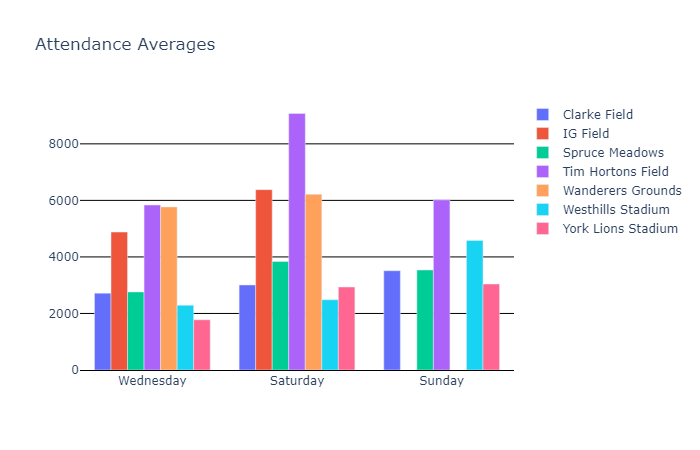 Not everyone has hosted a Sunday game, but I think we can leave it in the data set for now. The chart is small enough that we can still make sense out of it.

Every team has average attendance numbers that are highest on Saturday. For those that have hosted Sunday matches, Sunday numbers are higher than Wednesdays, but nowhere near what they are on Saturday. The Sunday attendance anomoly happens at Westhills Stadium. Why is that day so good, and even better than Saturday games, for Pacific? Something for that front office crew to definitely take a look at.

Another talking point about attendance is how much early evening games suck. There's not enough data to look at the difference between a 6pm match on Wednesday vs a 7pm match on Wednesday and derive any meaning from it. We also shouldn't compare 6:30pm Wedneday matches to 2pm Saturday matches. There are a lot of different forces in effect for the days of the week let alone the time of the day. Regardless, I plotted the league average attendance by match time to see what happened. 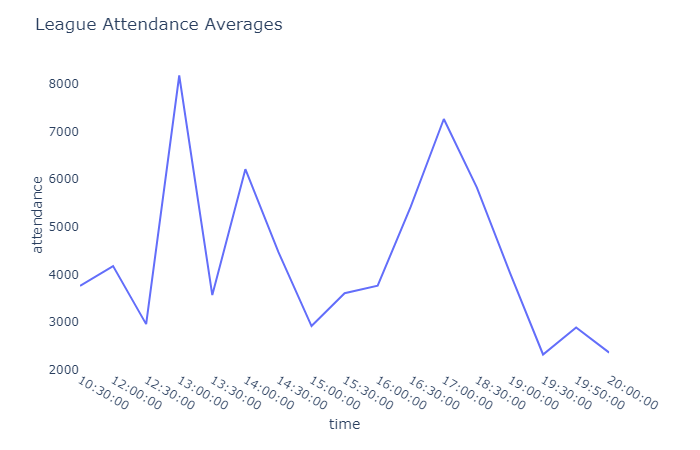 Can anyone tell me what time kick off was for the Forge and Valour opening games? Let's eliminate those outliers and see what we have. 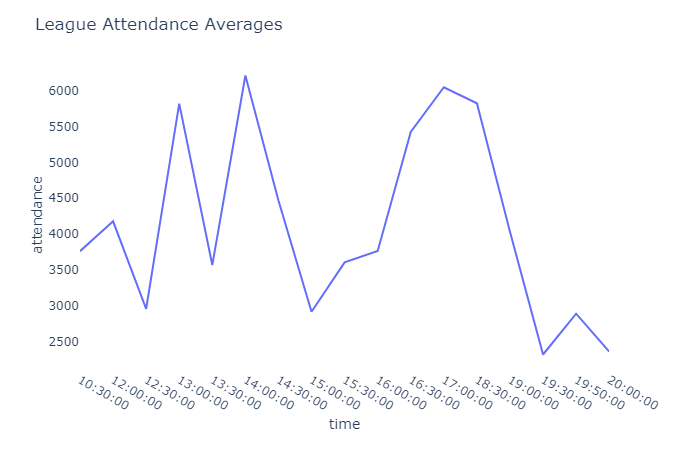 Truthfully, there's not much to be seen here. Afternoon games through the summer did well, but evening kickoffs have done well also. Sometimes the interesting thing is what we don't see in the data.