The CPL has a rule that requires teams to play U21 players for at least a combined 1000 minutes each season. The idea is that this will help to re-inforce the idea that the league exists, in part, to develop young talent for the national team. Prior to the kick off of the season none of us fans had any idea how much of an impact this would have on teams and their roster/lineup choices. It turns out that every team in the league pushed past that minimum requirement with about ten games left in their schedules. Some, looking at you Pacific FC, have done over 5 times the required U21 minutes.

I was thinking about this the other day and I realized that, of all the player minutes for the teams, the only minutes I knew anything about were the U21 ones. What about the rest? What could be interesting about them? Then I stumbled across Ben Mayhew's fantastic Experimental 361 blog.

One of the analysis that Ben did in the past was a look at the number of minutes played by the players on a team, and to group those minutes by the age of the players. It's an interesting look at how much reliance a team has on each age of player. Theoretically, a team relying heavily on minutes from players 30+ years old vs players in their prime (24ish to 29ish) is going to have issues with their lineup in coming years. As older players retire or move on, the current crop of younger players on the team will have less in game experience. Does the team rely on inexperienced younger players or does it go out and bring in experience?

It is an interesting question that teams with aging squads might need to ask, plan for, and possibly act on as the season winds down. So how is the playing out for the teams in the CPL. 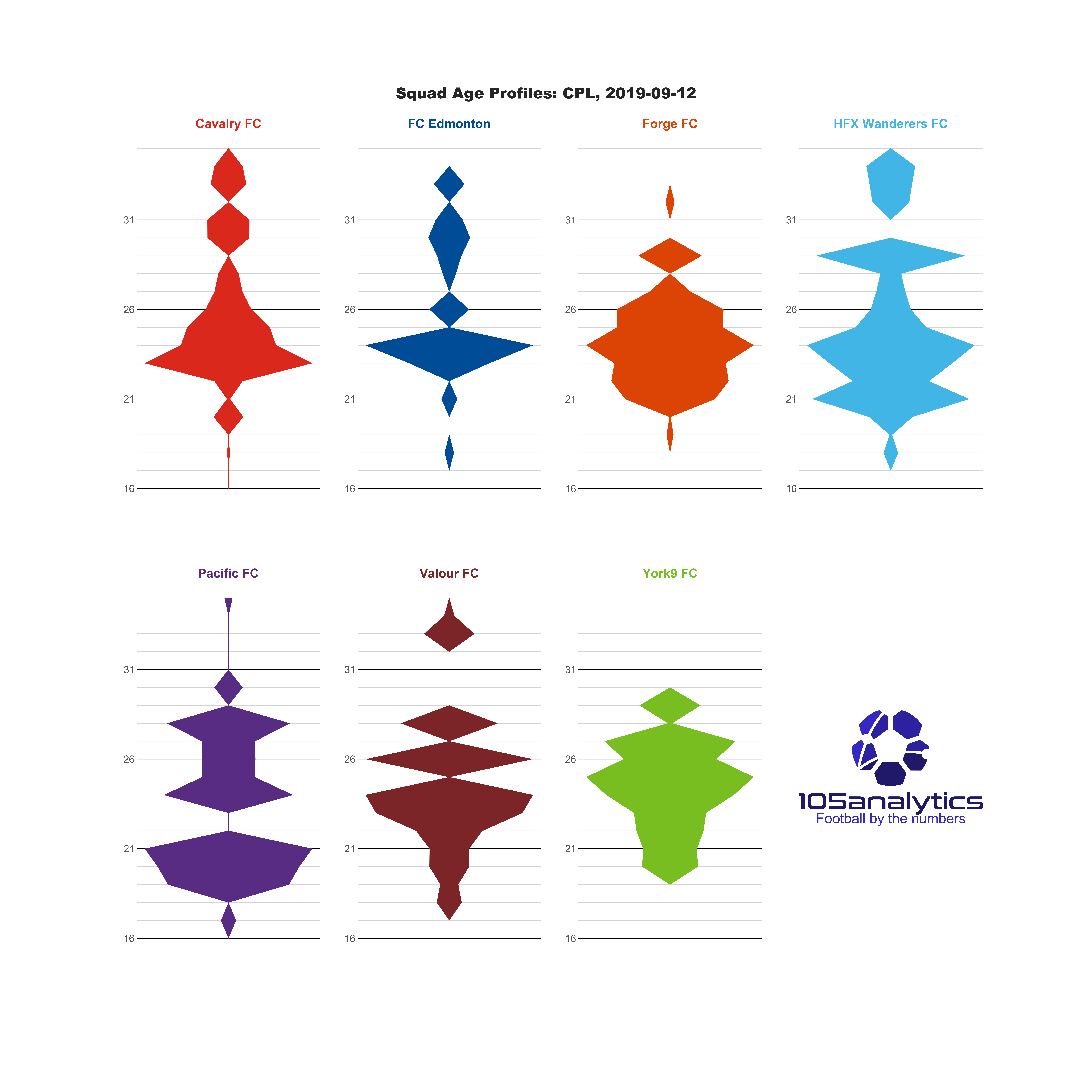 The key thing to remember when looking at these charts is that you can't compare the minutes at one age from one team to another. The x-axis scale varies from team to team. So, for example, the minutes played for 21 year olds on Pacific might be 4000. The minutes played by 25 years olds at York9 looks similar based on the width of the chart, but that might represent 2000 minutes.

Instead we should be looking at the relative number of minutes played between different age groups within a single team, and how the distributions across all the ages differs from team to team.

I leave you to take what you want from these, but overall, most teams seem to be setup with a nice amount of youth experience for coming years. Cavalry and FC Edmonton might have some concerns on the youth end while HFX seems to have biggest concern with older players.